We are based in the beautiful Sydney where we develop apps for amazing clients worldwide. Drop us a line or pop over for a coffee.

How To Launch Faster in Australia Using a Django Developer Choosing the right framework for development is a critical step in a project. Django is one of the most popular web development tools. Why is Django so popular? Why do we use it?

In this article, you will know what Django is and why it is so great for company web applications.

So, What Is Django?

It is an open-source framework for backend web applications. Django is written in Python, one of the most popular programming languages. The top goals of the framework aim to simplify development as much as possible. Below Django’s main design philosophies:

The framework has its own admin panel and its own naming system. Django’s technical features include:

How Django got so Popular?

Django is a highly popular framework. According to SimilarTech, it is used on over 82,000 websites and more than 53,000 unique domains.

In the 2020 StackOverflow Developer’s survey Django is ranked as a framework loved by 55% of developers.

Django is used in a great variety of industries, from art and entertainment to e-commerce. Several big-name companies, including Instagram and Pixabay, rely on Django for the development of their operations.

The chart above shows how versatile Django is. The majority of companies using the framework are in various industries. Then, the next most used category is in science and education. Many Universities and top colleges use Django for their websites, because of the ability of the framework to manage content.

Since its start, the Django framework stays year after year among the top preferred development framework. 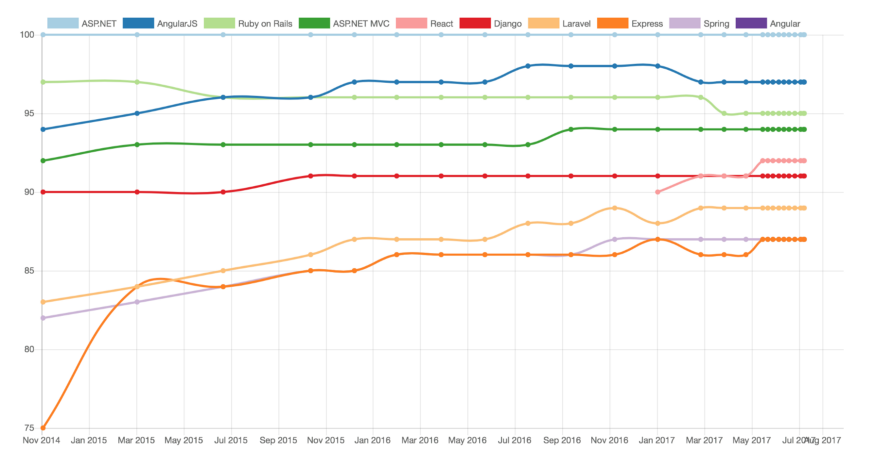 Django provides to its adopters with rapid development, robust security, and an easy-to-use interface.

Fast and easy to use

Since one of its top goals is to make work simpler for developers, Django has come with a couple of principles to achieve this.

It includes one of the best built-in-security systems. It prevents common security problems, such as cross-site scripting and SQL injection, releasing security patches regularly.

You can use Django for almost any web application project. It is scalable, so you can make applications for heavy loads of traffic. It supports multiple platforms, which means you can use it to develop on Mac, Linux or PC. Furthermore, it works with most databases, which enables you to use the database that is best suited for the project.

Django has tons of great third party applications and libraries that solve almost any problem in the best possible way. This ecosystem helps developers accelerate the process by choosing the right library.

What can you do with Django?

Since Django was created to manage a newspaper’s web application, it is great at handling projects that need handling high volumes of traffic and media content. But there are many other applications for the platform, from healthcare, financial, transportation, social media sites and more. Here are some examples of projects you can do with Django:

You can use Django also to build individual features inside other frameworks like:

Comparison between Django and Flask

Both Django and Flask are written in Python and are the most popular Python frameworks.

Flask is a micro framework that got increasingly popular in recent years. In the figure below, you can see how the adoption of both solutions has increased in the last decade.

While both frameworks are popular with developers, they have significant differences. Here are some of them:

Which Companies Are Using Django Framework?

Companies of all sizes use Django, from startups to big names. The scalability and high-load capacity make the framework ideal for large projects. The framework is so versatile, that can be used to build an MVP or a large system the same.

Since it is a free and open-source framework, it is constantly updated, and new features added all the time. This simplifies the life of developers by eliminating the need to create blocks. A developer only needs to look in Django libraries to find ready-made and already tested solutions.

Django can be used to build your MVP or and also for large enterprise projects. That is what attracted the following big names to use Django:

Since its development, the Washington Post web app has over 180 million visits a year. Django enables the newspaper to handle heavy loads of traffic. Soon after seeing the success of the WP, other publications like The Guardian, and the New York Times, adopted the framework.

The highly popular social network for image and video sharing requires processing vast amounts of data for its operation. Instagram is based in Python, so Django is a natural choice for a framework. Django helps Instagram manage huge workloads while keeping it simple.

Disqus is one of the largest Django projects. The comments and chat plugin used Django to ensure it can handle millions of users. They also used Django to develop side projects like Sentry. Disqus continues using Django to improve its service.

The app has changed the way people listen to music, making it accessible on any device, be it for free or via a subscription. Spotify relied on Python for backend and machine learning, combining it with the Django framework. This helped Spotify manage numerous requests from customers.

While originally YouTube was developed as a PHP project, the constant growth drove YouTube to change into Python. The need to improve its performance quickly made YouTube choose Django to implement features and upgrades seamlessly.

This popular cloud storage service handles millions of media and documents assets for its users. The online drive required a powerful framework to handle all those media assets and turned into Django. The framework enabled Dropbox manage storing, synchronising and sharing different types of files for millions of users.

The browser is still extremely popular so it has to manage large amounts of traffic. While it wasn’t originally developed in Python, it is using the language and the Django framework for all new components.

This web-based presentation software is a great alternative to Microsoft Powerpoint. It enables you to create presentations with a map-like setting that lets you take the viewer in a journey instead of a set of slides. What’s interesting is that this project was developed in Django from the start. They wanted the scalability that Django provided. Thanks to that, Prezi just reached 100 million users.

Australian companies are also enjoying the benefits of developing using a Django framework. Companies and government offices are developing apps and web applications. The range of industries goes from colleges to eCommerce platforms. For instance, the software company Atlassian is using Django for their Bitbucket product.

How SCSS uses Django to benefit the customer

At SCSS we are proud to be Django developers, helping companies across Australia achieve better projects with simple and fast development. Our full-stack development service builds solutions tailored to our clients’ needs. Read below for some use cases we carried.

The client company requested a multi-tenanted application that was going to be offered as a SaaS, (Software as a service). Multi-tenancy is one hard challenge to solve for developers. Choosing Django allowed us to achieve the client’s goals. Working with Django we were able to get multi-tenancy while working with a single Database, a single application code. Sticking to the Django way and not reinventing the wheel. We used a third-party library for multi-tenancy, which enables us to solve the problem fairly quickly and efficiently. That’s the beauty of Django.

Our client in the educational industry, a tutoring business. The company required a web application and a mobile app. After working together with the client to discover the requirements and goals, we chose to develop it on Django. Django worked wonderfully as a backend only system for this project. All APIs were developed via Django. Its Restful Framework made so much easier to expose the business logic via the APIs while keeping a high-security standard.

We were able to take advantage of Django integrations to include systems like Xero, Teachable while using the best solution.

But you can use Django for more than media asset management or web applications use cases, so we’ll explain with our last example.

While working with our customer company we saw that the best way to increase their engagement was via a dual strategy. On one hand, to create an e-commerce platform. On the other hand, combining it with a custom social media platform. The idea was to go one level up in customer engagement. Instead of just buying and selling, customers would be able to interact with each other, share comments, and so one.

The extensive e-commerce platform required a robust inventory management system. Without Django, we would have to retort to integrate different platforms, each one serving an aspect of the project. By using Django we were able to address the three aspects of the project with the same framework.

We also leveraged a third-party package Django-Oscar to handle the inventory management. SCSS then focused more on developing the social media aspect of the application. Django made it easier and faster to launch the product.

There are more use cases for Django that we are developing for our clients, but this is just a small sample of what can be done with the versatility of Django.

Django is a powerful and versatile framework that can be used for large and small projects. Large enterprises as Instagram and also small startups can benefit from the flexible framework. Django offers big and small companies:

At SCSS, we apply Django to help our clients achieve their business goals. This is one of the reasons we launch your app or web 10 times faster than competitors. Contact us today to learn how we can help you. 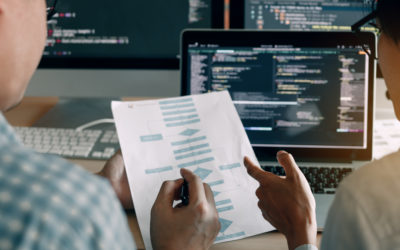 90% Of Software Development Projects Fail. How To Prevent It From Happening To You 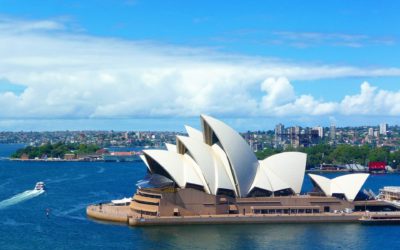